I’ve been going to writers’ conferences for years, but this past weekend’s NY SCBWI (Society of Children’s Book Writers) conference was particularly fun: It was the first one I attended as a contracted author.

It was a great time. Inspiring as always, and surprisingly stress-free when you’re not going in with high hopes for a critique. At the same time, attending the conference was somewhat bittersweet, because I saw myself in the hundreds of aspiring writers who weren’t in my position. The hope in those conference rooms was palpable, and as I met person after person who was in the querying trenches, or agented but not yet published, I couldn’t help feeling some survivor guilt.

It’s the flip side of professional jealousy, which has been wonderfully documented in essays by Philip Lopate, Bonita Friedman, Alison Cherry,  Susan Adrian, Suzanne Ferrell Smith with Cheryl Wilder and Donna Gambale, among others. Instead of feeling left behind, I worried about being the person leaving people behind, especially when I hung out with my new Fearless Fifteeners friends. I didn’t want to be THAT PERSON.

Before I went to medical school, I worked at a think-tank consulting firm. A lot of the work was mind-numbing, and so there was an enormous amount of turnover. When one of my best friends left to go to med school, a friend said, aptly, “It’s like being in prison. You’re happy for your friend that they get out of prison, but it also kind of sucks for you.”

I don’t want my friends to be in prison! I want them all to get agents that love them, and shiny book deals with dream editors. I hate hearing about their rejections, and want to smack the editors who turn down their manuscripts. I want to be able to celebrate their successes.

This idea of literary survivors guilt is one that I’ve been thinking about for some time now, since I got my deal. I think that it’s closely related to the idea of impostor syndrome, namely the fear that I am just an enormous fraud. Because I know exactly how good some of my pre-pubbed friends are. I’ve cried while reading their books, and fallen in love with their characters. I’ve envied the depth of their wit and marveled at how seamlessly they’ve turned over revisions. In short, I know that they deserve to be published.

Who am I, that I sold before they did?

As it so often does, SCBWI had the answer. Three talks in particular gave me incredible perspective, and hints at what I can do to cope with my survivor guilt:

1) Jane Friedman‘s breakout session on Building an Author Platform – This introduced me to the concept of “literary citizenship,” namely ways in which writers across the board can contribute to the larger community of writers and readers. This includes sending notes to authors whose work your appreciate, interviewing writers, buying books, and of course talking up books. A lot of her ideas are common-sense, yet the idea is genius, and I’ve become much more aware of what I can do to “pay it forward” to the writing community.

2) Elizabeth Wein‘s keynote – Like most people in the free world, I adored Elizabeth’s Printz Honor-winning Code Name Verity, but honestly I had no idea that she was such an incredible, down-to-earth, inspiring person. Elizabeth’s keynote speech on maintaining grace through disappointment and success kind of destroyed me. She talked about the bitter disappointment she felt when it seemed that her career had stalled; she talked about how she learned how to appreciate everything, and accept how fragile success was. And she had some basic tips on how to live the writing life gracefully: Don’t post negative comments online. Write thank you notes. Be cautious about success. Share. Do favors. And don’t respond when someone is less conscientious than you. 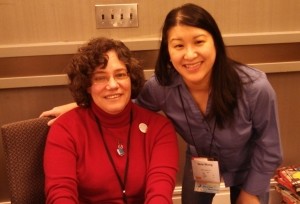 3) Kate Messner’s keynote – How can a talk called “The Spectacular Power of Failure” help with literary survivor guilt? Kate’s message was that failure teaches us when we’re going in the right direction. She told us stories of her figure skater daughter and engineer son as examples of how trial and error (controlled failure) makes us grow. Every failed draft takes us another step closer to the story we are meant to tell. 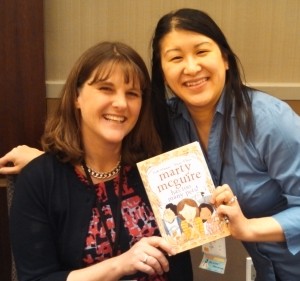 If there was one thing that an SCBWI conference gives you, it’s inspiration. I left that conference not only hopeful for my own career, but for that of my friends. In the publishing world, there’s no Get Out of Jail Free card. But there is the promise that, in the end, talent and hard world will be rewarded. Maybe not with this book. Maybe not with the next book. But the words will always be there. And my friends’ day will come.

10 Responses to On Literary Survivor Guilt