A little more than a week ago, I met my book for the first time, and it was like:

Granted, it wasn’t the fully grown book, more of a teenager really; Advance Readers Copies, or ARCs, aren’t copyedited and are printed in paperback without a lot of the bells and whistles that will be in the final version. But still.

My book. None of the Above in tangible form. That I could sign, which I did for several dozen amazing and enthusiastic booksellers.

ABelow are some pictures of my very first author event (NAIBA) I’m so sorry that I can’t put the full image online quite yet…but please stop throwing those tomatoes! I’ll be revealing my cover NEXT THURSDAY on The Book Smugglers! More exciting, the Book Smugglers will also be running a giveaway to receive one of the lovely ARCs below (in other words, this is your chance!):

Now that ARCs are out, though, things are getting really scary, because PEOPLE I DON’T KNOW ARE ACTUALLY READING MY BOOK. Which is pretty much the stuff of nightmares. Think trolls and angry critics and, worst of all, people who go “meh.”

Basically, there is a high likelihood that I’ll be tempted to self-prescribe some Xanax in the coming months.

On the flip side, PEOPLE ARE ACTUALLY READING MY BOOK. And the first group of people I sent it to wasn’t my family… it was the intersex women who so graciously allowed me to attend their support group. I spent much of Monday night making care packages including some bookmarks designed by my super-talented friend An-Lon Chen, making sure to use orchid stationery to honor their logo. 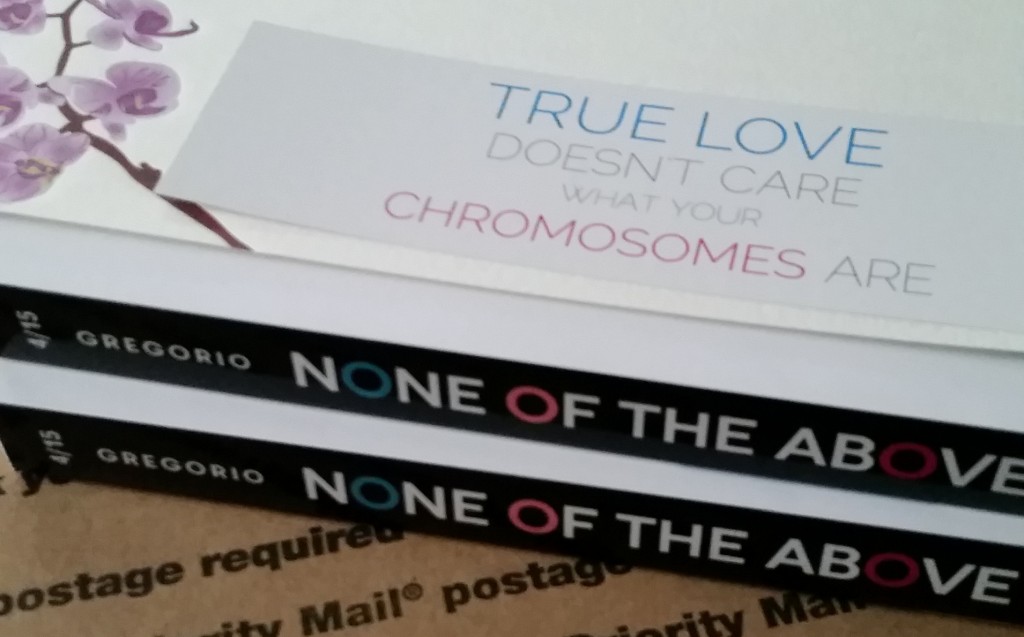 I won’t lie – in many respects this could’ve turned into the most terrifying nightmare of all. But so far so good. So far. Because this morning, my baby woke up at 5am wanting to eat, but I sprung up wide awake, because when I looked at my phone to see what time it was, I saw this: 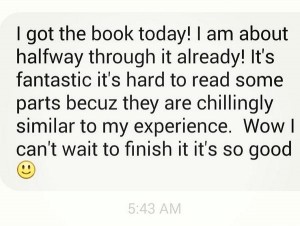 Sure, everyone else might think it sucks. But still.

My book. None of the Above in tangible form.

So check out the Book Smugglers next Thursday for my cover reveal – and while you’re there, pop over to YA Highway for Lauren Gibaldi‘s reveal of The Night We Said Yes, as well as Hypable’s reveal of Alexandra Sirowy‘s The Creeping next Tuesday 10/7!