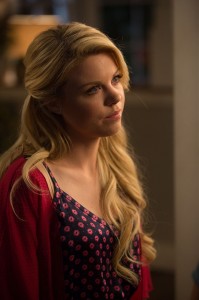 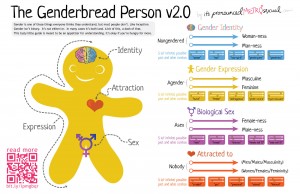 One of the reasons for the general lack of awareness about intersex, even among medical professionals, is that it is an incredibly complex, nuanced field of study involving over 30 biological conditions. The term intersex covers a spectrum of medical conditions and chromosomal differences ranging from hypospadias (when someone’s pee hole isn’t where it’s supposed to be), to conditions where people have one testis and one ovary. In the case of people with AIS, they have XY chromosomes and look female on the outside, but don’t have uteruses and have testes instead of ovaries.

There are even some types of intersex that haven’t been fully diagnosed, in that they don’t fit into the exact cluster of characteristics that match a known syndrome. These people are literally one of a kind!

More important than there being a range of biological expressions of intersex is that people experience intersex differently. So the main character in None of the Above has a very, very different experience than that of the character in Jeffrey Eugenides’ Middlesex, or Abigail Tarttelin’s Golden Boy.

Myth #3: Intersex is a rare condition

Depending on how wide your definition of intersex is, the prevalence of intersex conditions ranges from 1 out of 100 people, to 1 in every 2,000. The now-defunct Intersex Society of North America has a great breakdown of the statistics on their website (as well as a lively discussion on the difficulties inherent to coming up with the aforementioned statistics).

Even if you take the 1 in 2,000 number, that means that intersex individuals are as common as redheads.

Myth #4: Intersex should be surgically corrected

This is one of the most damaging myths that exists. In fact, for many years, it was a reality in the medical profession. As recently as a decade ago, parents of children born with intersex or ambiguous genitalia were counseled to have their babies undergo surgery to “normalize” their sexual characteristics. This, however, often led to complications. Kids grew up with horrible consequences of being operated on so early.

Because of such activist groups like the Intersex Society of North America and Accord Alliance, times are changing, albeit slowly. Surgery is no longer the default. But it still happens, as the case of M.C., a 8-year-old ward of South Carolina who was born intersex and subjected to feminizing surgery as a toddler. He now identifies as male.

When I first wrote my novel, I was scared. What if no one wanted to buy it? What if intersex was considered too risky? A few people passed on it due to concerns over how well it would sell. But a number of people were interested in it. Really interested. And I shouldn’t have been surprised. Middlesex was a bestseller, and an Oprah’s Book Club selection. Intersex characters have made it onto House, and Grey’s Anatomy.

A lot of people are fascinated by the subject of intersex once they come across it – the problem is that a lot of people don’t even know that they exist. As Accord Alliance says, intersex “has been largely invisible to many people.”

Why do so few people know what intersex is? Like many things related to sex, there has been a veil of secrecy and shame surrounding intersex conditions. It’s the goal of None of the Above – and that of MTV’s Faking It and Inter/Act Youth – to break through this veil.

Here’s the trailer for Season 2 of Faking It. I hope you check it out – I know I will!

9 Responses to 5 Myths about #intersex – debunked